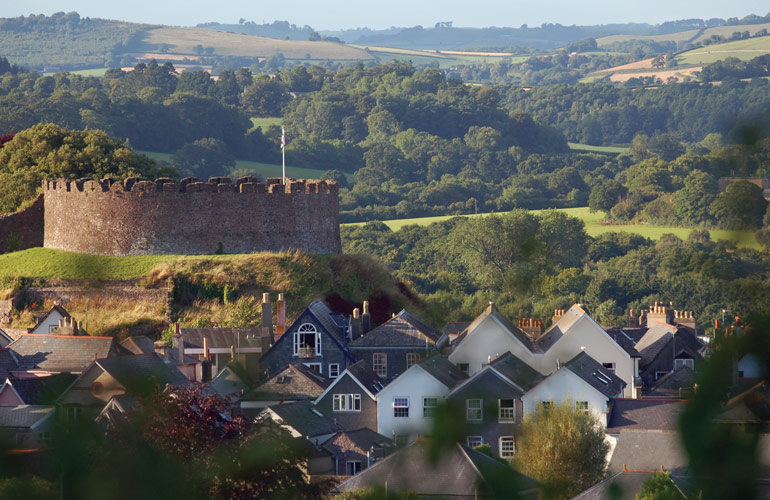 Totnes Castle stands on a 17.5 meter high manmade motte, which looms over the historic medieval town of Totnes. From its battlements, it commands a splendid and picturesque view across the town below as well as offering scenic views of wild and rugged Dartmoor. Totnes Castle is steeped in a rich and varied history and is the one of the best surviving examples of a Norman motte and bailey castle. Both ‘motte’ and ‘bailey’ are old-French words, ‘motte’ meaning ‘hill’ or ‘mound’ while ‘bailey’ meaning ‘low yard’. Due to Totnes’s strategic position and close proximity to the River Dart, Totnes was a logical place to build a motte and bailey castle.

Totnes was a well-known port town and had a reputation of being one the best places to harbour a boat; this was due to how far a ship could navigate inland. Evidence of this can be found in a book called “Historia Regum Britanniae” which was written in 1136 by Geoffrey of Monmouth. With a port, Totnes became a fairly wealthy town, as a result of this influx of prosperity, King Edward the Elder in 907 had the town fortified, this resulted in Totnes becoming one of the only fortified towns in the South West, which is evidence that Totnes started to become distinctly affluent. However later on in the town’s history, the mint in Totnes at the time of 1036 (thirty years before the Norman Conquest) had ceased minting, which was an indication that the importance of the town had started to dwindle. Totnes was accorded with a royal charter by King John in 1206, which transformed Totnes into a free town. This meant that Totnes was allowed to formulate its own laws. However Totnes grew to be once again a very prosperous town and in 1523 it was the second richest town in Devon and sixteenth richest town in the whole of England.

Flowing from two sources on Dartmoor, down to the sea at Dartmouth, Totnes is an important stop along the River Dart situated between the moors and the river's mouth. The town offers an excellent jumping off point for exploration of the river whether by foot, boat or canoe, and is the point where it becomes tidal. Even for those who just want to admire the river without getting their feet wet there are many ways to enjoy the Dart, and many things Totnes has to thank the river for – and the two bridges crossing it. dogs cbd Bridges and Bridgetown Totnes Bridge has the honour of being the last bridge to cross the Dart before it reaches open sea, as plans to build a railway bridge across the river mouth from Kingswear to Dartmouth in the late 1900s never came to fruition. There have been multiple bridges across the river in Totnes beginning with a river ford and evolving to the familiar stone bridge today. It was once a toll bridge that separated Bridgetown from Totnes until it was opened up on October 31st 1881 for everyone to cross. A second bridge was built in 1982 and although less picturesque than the older bridge was necessary for the increasing amounts of traffic passing through Totnes and across the Dart. It is named the Brutus Bridge after the legendary founder of the town. Whichever side of the bridge you're on there are many places to enjoy the river from. Vire Island is worth a visit for anyone looking for a nice spot to enjoy a picnic. Although not a proper island the 400m peninsula is named after the French town Totnes is twinned with (not Narnia) and is the perfect spot for contemplating the river from in the summer. And there are plenty of restaurants  and cafes to eat or enjoy a drink in, high tide or low, rain or shine.

enter A radical new organic inn for Devon, squaring up to the seasonal veg hijackers and leading the way in doing business better. Is it possible for a pub to lead the way in sustainable food and ethical hospitality? It can, says organic publican Geetie Singh- Watson, provided fairness and authenticity as well as profit are at its heart. Geetie and the team behind the eight-bedroom organic inn aim to show through their actions that it’s possible to make choices based on decent values while being a serious player. Jump back 23 years when Geetie started out in the pub industry, ethical working practises weren’t even part of the industry agenda. Now, at least, the hospitality trade has woken up to the fact it needs to seriously shift its priorities. But there’s still far too much chat and not enough action. On the whole, it scores low when it comes to green thinking. Half-hearted requests to reuse towels aside, staggering water usage and eye-watering food waste are still the norm. In contrast The Bull Inn in Totnes, Devon will reopen its doors in early December 2019 after complete renovation, but this is not your usual we’ve-done-up-a-gastropub story. You will never see a generic foodservice delivery van outside, only farmers, co-ops and artisan producers making deliveries, and there will never be a packaged snack or bottled, transported water served at the bar. Instead this is an inn whose relationship with its community and its impact on the environment is as refreshingly engaged and honest and as you can hope to find. The inn aims to be sustainable to its core; with manager Phill Hughes and chef James Dodd at the helm the food served will be organic and the sourcing will be rooted in a logic that acknowledges the complexity of what we need to do to feed ourselves sustainably, but without being martyrs. This is a pub where you won’t find menu marketing greenwash. “The term ‘local, seasonal veg’ has been completely hi-jacked and is bandied around and abused so much that it now means nothing. A season for what? So often when you challenge places serving so called seasonal food it doesn’t stand up to scrutiny. But we won’t be serving woody turnips in April when the UK crops run out; instead we will source beautiful veg from farmers we know further afield around the UK, Europe, alongside Fair Trade tropical fruit. But will never air freight and will never say we are something we are not,” explains Geetie. With no whiff of a theme or fairy light in sight the inn has been revived using upcycled, recycled and reinvigorated décor, from tables and curtains to radiators and doorknobs. The team is proving that new is not always best, that craftmanship should be valued above all instead of seeking homewares manufactured far away with cheap labour to feed the latest style trends. “We’ve got to find a way to live and enjoy life sustainably, and I believe that’s an exciting thing. We need to push ourselves out of the way we have always done things; Like all other business areas hospitality needs shaking up. Our aim with The Bull is to show that you can work with integrity and succeed,” Explains Geetie. The opening comes at a time of social and political upheaval in the UK, and the hope is that The Bull will be a beacon of togetherness and inclusivity for the Totnes community, visiting travellers and the team that works there. It will be a proper inn and a decent boozer, where brilliant food, ale and wine will jostle alongside a raft of community goings on. “I want to prove you can be radical, effective and have a positive impact on society and the environment while running a successful business too. It is not impossible!” continues Geetie. “We don’t claim we are perfect but we are trying our absolute best. You have to have hope that there is a better way.” This is Geetie’s fourth pub refurbishment, with the first being the iconic Duke of Cambridge in Islington. Organic since the beginning, Geetie was trailblazing sustainable business and thoughtful food in the 1990s, way before anyone gave a second thought to plastic straws and bottled water. Having said all that, The Bull is not a place steeped in worthiness; There will be plenty of fun there too. “By that I mean fun for all – the team, the suppliers, the customers. Fun should spread. It has always been a really strong motivator for me. Everything should always come back to doing things well and watching others getting fun out of it too.“ www.bullinntotnes.co.uk cbd candies The Bull Inn will open its doors on 1st December 2019. kana cbd Alongside amazing food and rooms, we have a beautiful on-site see treatment space. Sharing the same sustainability values as The Bull, Sarah Carr and Jo Woolvett will be offering natural beauty cbd oils with thc treatments and holistic facials for men and women. click here Walking the walk: • Heat capture systems in the kitchen to create hot water downstairs • Solar capture on the roof to power heating in the bedrooms • 100% organic linens from Greenfibres in the eight bedrooms • Bedside lamps carved from Dartmoor wood by local craftsman Rodney Lomas • Ceramics by local artisan Pippi & Me • Mattresses from Naturalmat in Exeter augmentin 10 days About Geetie Singh-Watson MBE Geetie Singh-Watson is the founder of the first official organic pub in Britain, The Duke of Cambridge Organic Pub, in Islington, London. In 2009, she was awarded an MBE for ‘Services to the Organic Pub Trade’. An active campaigner and environmentalist, Geetie firmly believes that businesses must act responsibly and be led by their ethics and values. Her broadcast work includes presenting on BBC Back to the Land.

synthroid kidney failure Ben’s Farm Shops are always on the lookout for solutions to tackle the single-use plastic issue and here's another one that they hope is going to prove popular with customers. If you're looking for an environmentally sustainable alternative to clingfilm without the bulkiness of Tupperware, then these organic cotton and beeswax food wraps will be right up your street. These colourful little numbers come from Cambridge based supplier Bee Bee wraps. Bee Bee is the brainchild of Kath Austin,who, inspired by a conversation with a friend (and the fact that cotton and beeswax has been used as a food wrapping tool for centuries) started experimenting in her kitchen with various formulas until she hit upon the perfect one...and the Bee Bee wrap was born. The wraps are ethical and sustainable from cotton grower to production, with the company working closely with their beekeeping communities to perpetuate the pollinating population and they aim to be zero waste in everything that they do. Simply made from organic cotton, beeswax, tree resin and organic jojoba oil, the wraps are completely compostable but if cared for properly, each wrap will last at least a year. They are breathable and won't cause food to 'sweat', therefore increasing the shelf life and cutting food wastage to boot. Bee Bee uses low impact dyes and is confident that, whilst the wraps have a beautiful 'beeswaxy' scent, this does not taint food at all and does fade with use. To care for your wrap and get the very best from it, hand wash in cold water and ensure any food to be covered is cold before doing so. Bee bee wraps are not suitable for use in microwaves, dishwashers or washing machines and you should avoid wrapping raw meat and fish in them. They are very malleable when warm so use warm hands to mould them and create a breathable seal around your food - once they have cooled down they will hold their shape. The wraps are available from any go Ben’s Farm Shops. 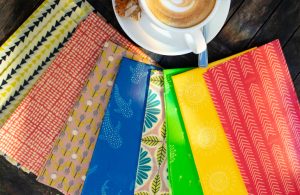 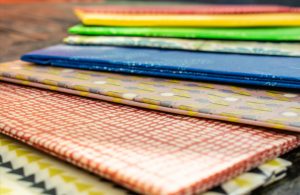 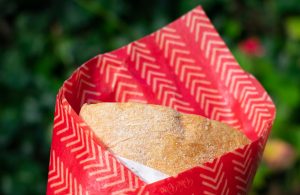