Home > Blog > Totnes and surrounding area in the Spotlight . . . 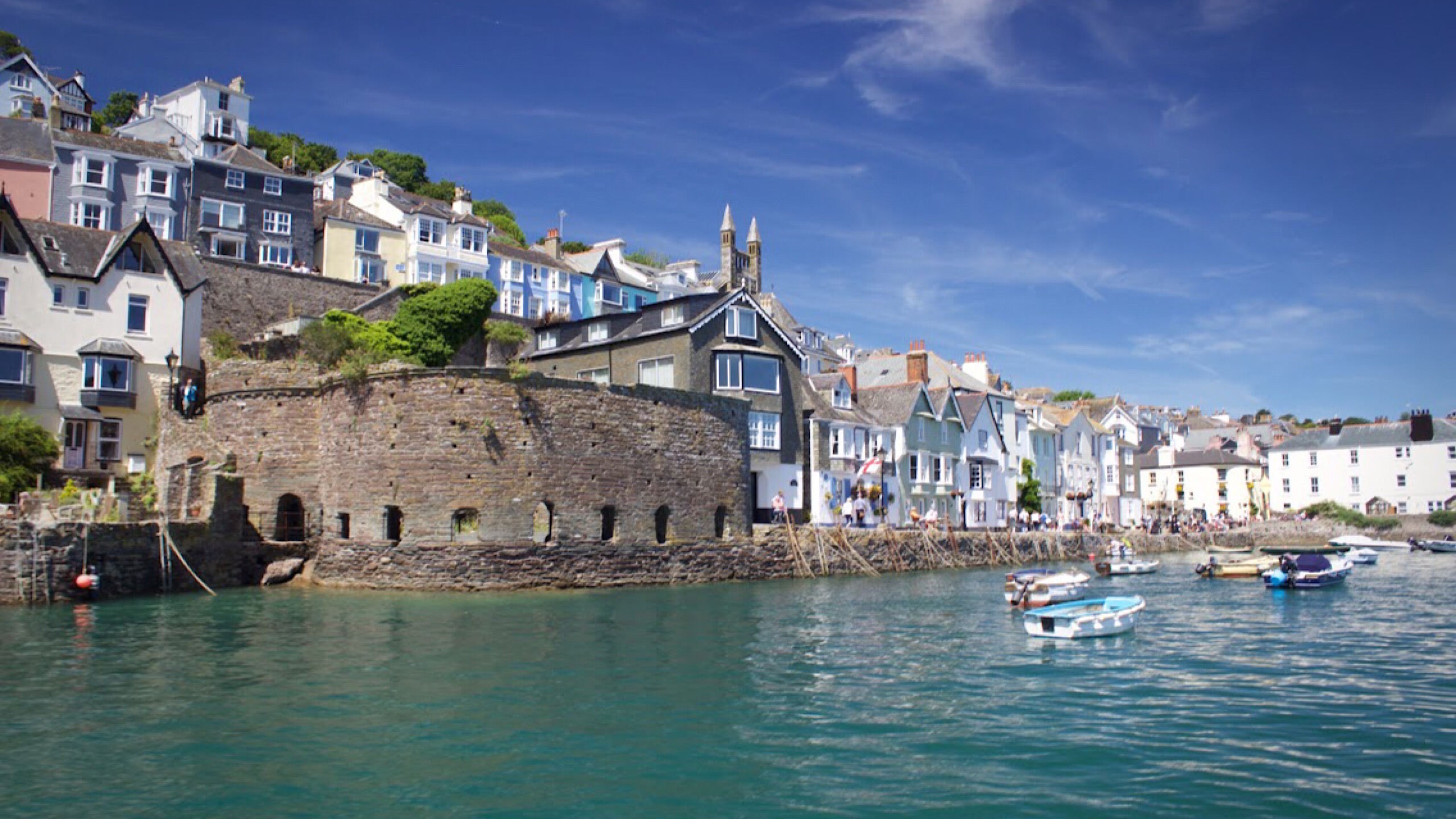 Totnes, and the surrounding South Devon area, has often had a starring role in films and television series. Churches, historic houses, ferries, even harpoon guns, carnivorous crabs and suicidal fish, they’ve all played their part.

Down the River Dart from Totnes is “Lighthaven”, as featured in the television series The Coroner, a town better known as Dartmouth to locals of course. The hit daytime show stars Claire Goose as single mum Jane Kennedy who returns to her hometown to investigate murders alongside childhood sweetheart Detective Sergeant Davey Higgins.

Producer Sandra MacIver says “We wanted to feature Dartmouth as a major location as it’s so beautiful and the view across to Kingswear is breath-taking. The way the light twinkles across the River Dart always makes it feel like summertime, even in February. The slogan we use for The Coroner is ‘summer holidays all day long every day’. “Dartmouth provided us with a town feel to our fictional Lighthaven,” says Sandra. “We’re made very welcome by the locals. They help us out a lot and we in turn we try and keep ourselves discreet and not get in the way of the busy town.”

Amoungst other sites used in the filming of The Coroner are Blackpool Sands, Leonards Cove, Slapton Sands, Bellever Forest, Bonehill Rocks, Hound Tor and Salcome. And not forgetting the Dartington Estate of course as this features regularly throughout the series, and is where The Coroner’s production office was based.

Dartmouth is not of course new to being featured on television as it was also used for the Onedin Line, a 1970s BBC shipping drama set in Liverpool. Bayards Fort, the scene of many TV series, was used in the series and is at the far end of Bayards Cove from whence to Pilgrim Fathers sailed a long, long time ago.

Further along the coast at both Bigbury on Sea and Burgh Island Agatha Christie’s two famous sleuths and acclaimed crime-solvers Poirot and Miss Marple have been filmed, starring David Suchet and Geraldine McEwan respectively. The beach at Bigbury on Sea has also been seen in television shows such as the 1980s’ classic Lovejoy and GMTV’s slimming segment Inch Loss Island (starring Anton du Beke).
As well as the setting for various adaptations of Christie’s Evil Under The Sun, the location also featured in the 1965 film Catch Us If You Can, starring the British band The Dave Clark Five.

Further along the coast is the port and seaside town of Teignmouth, used for The Mercy, the Donald Crowhurst Movie. Filmed in Teignmouth in June 2015 and starring Colin Firth and Rachel Weisz the film tells the story of the doomed yachtsman Donald Crowhurst. The film was released in February 2018.

Moving inland as far as the parish of Marldon, in the small village of Compton, Compton Castle was used as the estate of one of the characters in the film Sense and Sensibility. Sense and Sensibility was a hit screenplay directed by Ang Lee and based on the Jane Austen novel. With an all-star cast, featuring Alan Rickman, Emma Thompson, Kate Winslet and Hugh Grant it managed to be nominated for seven Academy Awards with Emma Thompson scooping the Award for Best Adapted Screenplay, having written the script as well as staring in the film herself.

St Mary’s Church in Berry Pomeroy also makes an appearance in the final wedding scene of the film and is situated not far from Totnes. Built in the 1490’s this historical building is still a large part of the community at Berry Pomeroy. Nearby is Berry Pomeroy Castle, rumoured to be one of the most haunted places in England, making the Castle and St Mary’s Church a great day out for film lovers and history buffs.

Moving even further inland and thanks to the release of the popular film War Horse, co-produced and directed by Steven Spielberg, Dartmoor National Park is now a must see destination when coming for a holiday in South Devon.

The box-office hit, released in the UK on 13th January 2012, focuses on the captivating story of a farm boy from Devon, Albert Narracott (played by Jeremy Irvine) who grows attached to his young horse, Joey. After a heavy downpour which destroys the family’s turnip crops, his father, is forced to sell the horse to the army so that he can pay his rent. The blockbuster takes the audience through a moving journey about how Albert joins the army in search for his horse Joey after he is shipped to France during the First World War. Benedict Cumberbatch and Tom Hiddleston have roles in the movie.

Locations used included Haytor, Combestone Tor, Venford Reservoir, Meavy and Sheepstor. Spielberg praised the beauty of Dartmoor, saying “I have never before, in my long and eclectic career, been gifted with such an abundance of natural beauty as I experienced filming War Horse on Dartmoor.”

Many of the locations used in War Horse are in rural areas on Dartmoor but are still within a short driving distance of Totnes.

Charity invests £1.6million in a new retreat venue at Sharpham

The Sharpham Trust is investing £1.6 million to convert a stable yard behind Sharpham House to a new centre for mindfulness courses and retreats.

The charity, which works to connect people to nature and themselves, has begun the creation of The Coach House - which will feature a new meditation space and 18 en-suite rooms.

The current, disused stableyard is a Grade II-listed building, dating back to 1760 when Sharpham House was built for the naval sea captain Philemon Pownoll.

Now work has begun to develop the single-storey quadrangle directly behind Sharpham House into a new retreat centre where participants can stay, amid historic grounds thought to have been landscaped by Capability Brown.

The Trust runs an annual programme of courses and retreats featuring mindfulness meditation and nature connection on the wider Sharpham Estate and on the adjacent River Dart.

“Prior to the pandemic we were finding that our programme was fully booked with long waiting lists,” said Trust Director Julian Carnell.

“As a charity we want to help as many people as possible and so creating more accommodation became a priority. The stable yard had become rundown and so there was a fantastic opportunity to give the building a new lease of life and restore it as part of the Sharpham Estate’s important heritage,” he said.

Retreats in The Coach House

The Coach House will join the Trust’s other retreat venues Sharpham House, The Barn Retreat and Woodland Campsite and it will offer a weekly programme for those in need of developing and deepening their mindfulness practice, compassion and their connection to nature.

Participants staying there will be able to spend a week living in community surrounded by the amazing natural environment of the Sharpham Estate.

They will spend time volunteering in the 18th century Walled Garden – helping to grow food for the retreats at Sharpham – and conserving the heritage and wildlife of the wider estate.

Chairman of Sharpham’s Trustees Daniel Stokes said: “Our mission is to connect people to nature and foster mindfulness and wellbeing. There is now a plethora of research showing the physical and mental health benefits of spending time in nature.

“This project will enable us to help another 1,000 people a year, giving them a chance to spend time slowing down and reflecting in a beautiful natural setting,” he said.

The Trust is using South Devon firm Carpenter Oak to build the frame for an eye-catching glass structure linked to The Coach House which will be the new centre’s meditation and dining space.

Classic Builders, a local South West-based construction company, has been awarded the contract to convert the Coach House and hopes to complete the works by January 2022.

“We are delighted to be working with The Sharpham Trust on this significant local project. The Coach House is an important listed building, not only in a sensitive location but also next to Sharpham House. We’re looking forward to drawing on our years of experience delivering comparable works in similar settings to make this project a success,” said Adam Brimacombe, Director at Classic Builders.

The Trust has been busy over the last ten years developing its charitable programmes and refurbishing the heritage of its listed landscape and properties. Every year, some 2,000 people attend retreats, courses and events on the Sharpham Estate. 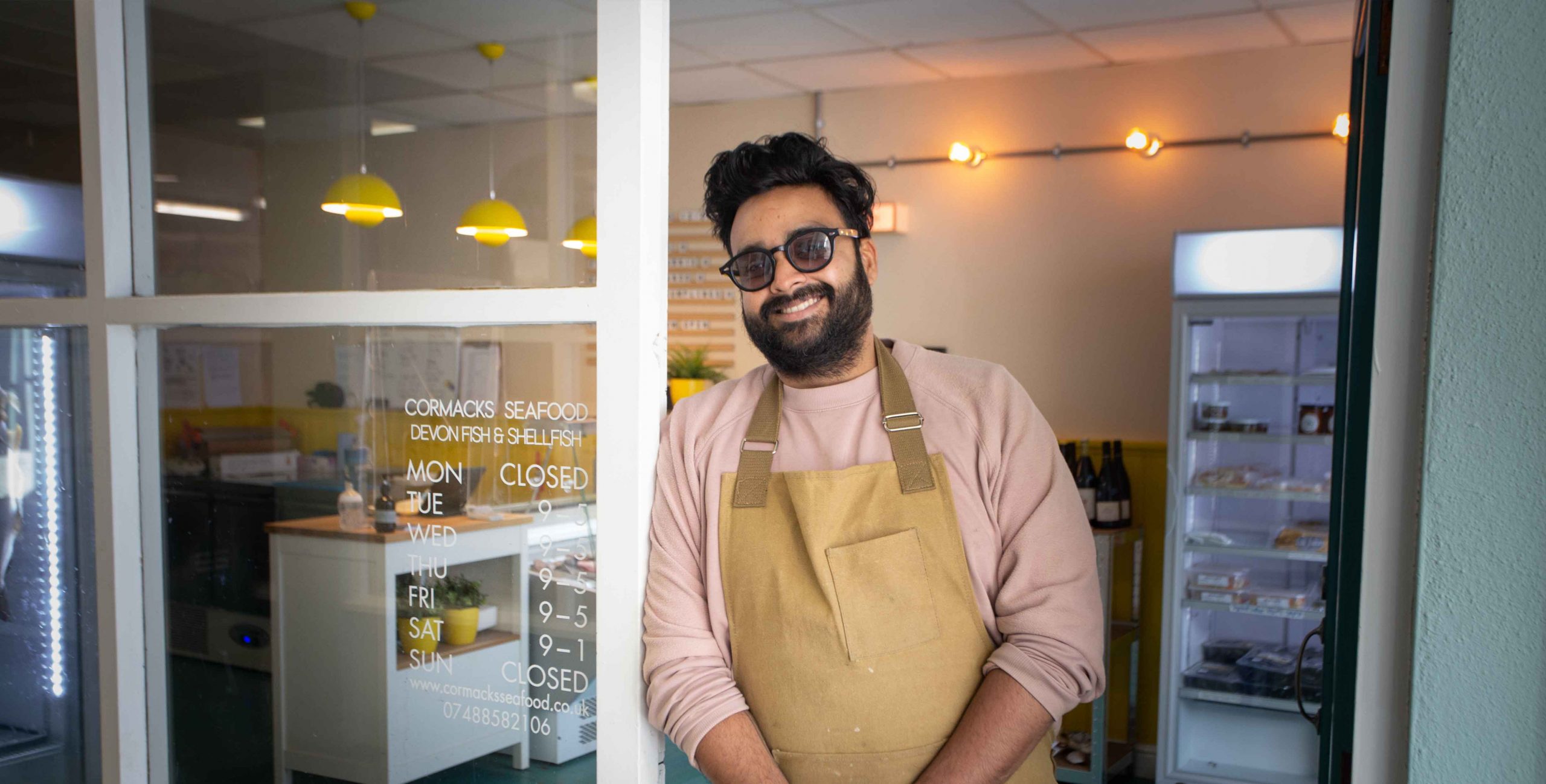 Cormack's Seafood recently launched a takeaway lunch menu from our fish shop. We sell a range of four sandwiches, featuring our handmade products. On offer at the moment is:

Our fish fingers are made using line caught pollack from Devon and are battered in panko breadcrumbs, dill and spices. Our katsu fillets are inspired by Aarik’s (owner and chef) time working in South-East Asia and are made with plaice landed in Brixham.

The takeaway is available every day from noon Tuesday to Saturday. We are located on Ticklemore Street in Totnes. 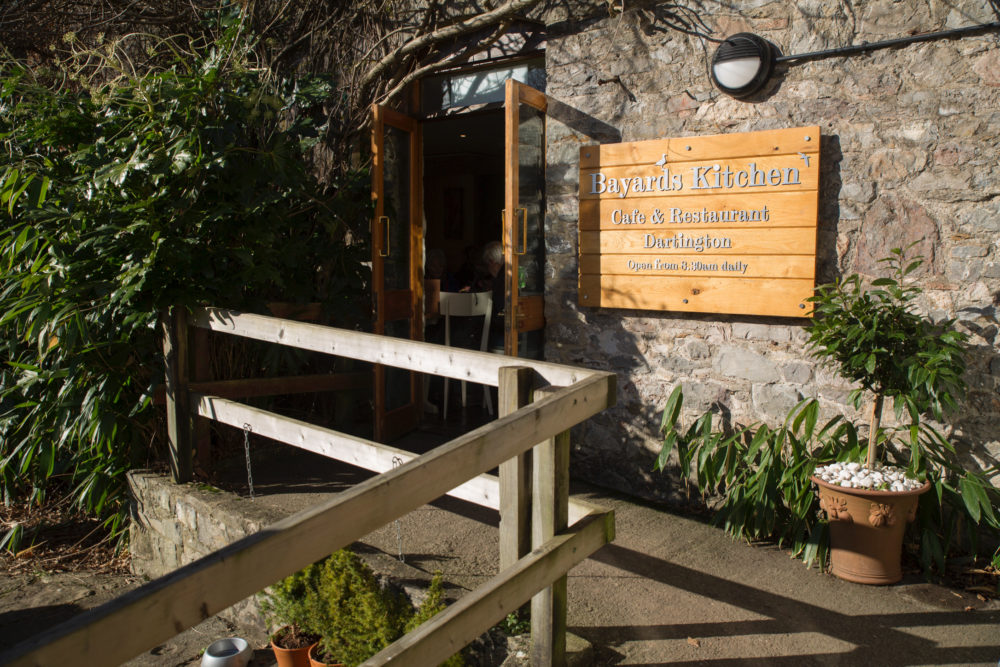 Bayards Kitchen is offering all those who work in emergency services 10 per cent off food and non-alcoholic beverages at its Dartington café to coincide with the launch of its new weekly pizza evenings. The café, which was taken over by Charlie and Zuzana Deuchar in November 2016, is a thriving hub for the local community and beyond, with safe play areas for toddlers indoors, and eclectic menus that includes vegan, vegetarian and gluten-free options. Now Charlie and Zuzana want to give back to the local emergency services by giving them a permanent discount off all food and non-alcoholic drink orders. Charlie said: “People who work in the emergency services spend their working lives looking out for others and saving lives. “This is just something very small that we can do to show how much we respect them. We’re very much community focused and its great to be able to thank those in our community who are devoted to helping others. This is just a tiny perk to let them know how much they are valued.” Those eligible for the discount include NHS workers, armed service personnel and those who hold a Blue Light Card, which provides a multitude of discounts for armed service personnel. The discount will be launched on May 18, at Bayards Kitchen’s inaugural pizza evening. “We’re really proud to be supporting the emergency services in this way, and we thought the perfect time to launch would be at the first of our Friday night pizza nights when everyone who comes along will be given a free glass of prosecco. Everyone loves pizza and we’ll be offering eat in and take out service,” said Charlie. To view the pizza menu visit www.bayardskitchen.co.uk

The Share Shed, Totnes’ library of things, has won £48,599 from the National Lottery Community Fund in this year’s Peoples Projects competition. Its success means it can now become the world’s first mobile sharing library.

Share Shed staff and volunteers were told the news, live on ITV, last Thursday, following a public vote in the first two weeks of April.

The Share Shed will now go mobile - extending its service beyond Totnes to Ashburton, Buckfastleigh, Dartington, South Brent and the villages around, supporting a more sustainable and collaborative lifestyle.

Mirella Ferraz, Share Shed Coordinator said: “We’re thrilled to have won the grant, especially in this case, which highlights how many people supported our project! We’re very grateful to every single person who voted for us”.

The Share Shed is at 16 High Street, Totnes, and is open on Tuesdays and Thursdays from 2pm to 4pm, and on Saturdays from 10am to 1pm. To see everything the library of things offers, visit shareshed

Mirella adds “We’re overwhelmed by the support we’ve received – and we’d love to have even more volunteers involved with our project. Supporting the Share Shed is a great way to help people whilst saving a lot of natural resources. If you’d like to get involved, please get in touch via info@shareshed.org.uk”. 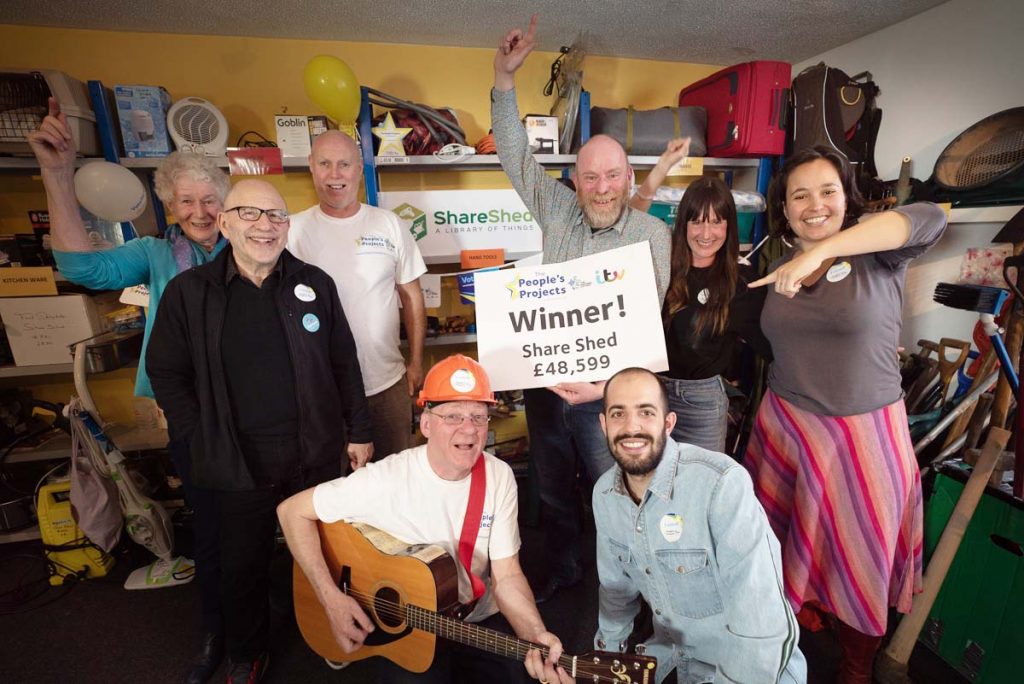