8 million pieces of plastic are making their way into the ocean every day, an estimated 8.3 billion straws are on coastlines around the world and 1.75 billion single-use plastic bags are still being handed out by supermarkets in the UK. With plastic never fully degrading this has already and will continue to have a huge impact on our planet. The 5p plastic bag levy (which will soon increase to 10p) has helped to reduce the number of bags being used and there are other nationwide schemes available, however much more still needs to be done.

Many of the local businesses and organisations in and around Totnes have been making a conscious effort to reduce, reuse and recycle for many years now. Most recently the Plastic Free Totnes campaign has been developed, a community-driven movement aimed at reducing the use of single-use plastics across town. Formed from the Transition Town Totnes Waste Into Resources group in partnership with Totnes Rubbish Walks and Totnes Against Trash, they have signed up to the ‘Plastic Free Communities’ campaign led by Surfers Against Sewage which sets out 5 objectives for the town to meet including replacing single-use plastics with sustainable alternatives.

Many businesses including Waterside Bistro have signed up to Refill Devon, a free tap water initiative designed to reduce plastic pollution by making refilling a water bottle easy, social and rewarding.

Earth Food Love was the UK’s first zero-waste shop and is based at the top of the High Street in the area known locally as the Narrows. The shop was started by ex-Manchester United player Richard Eckersley and his wife Nicola after their frustrations with how much packaging they used as a family. With a simple self-weighing system, consumers can bring in their refillable pots and buy everything from flour to peanut butter, tea, fruit, syrup and many more food items, plus non-food items including washing up liquid, wooden toothbrushes, metal straws and bamboo cutlery.

Other businesses who are striving to significantly reduce their waste and actively encourage recycling include the riverside restaurant Waterside Bistro who feed their coffee grounds and vegetable peels to the owners’ chickens, and the Totnes Brewing Company who feed excess malt and grain from their brewing process to local pigs. 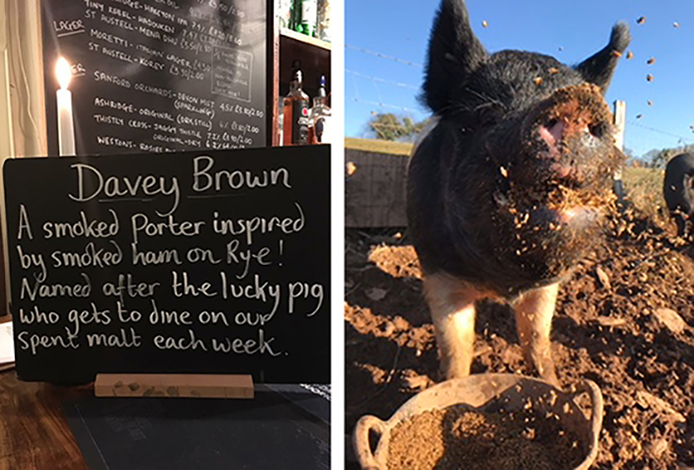 As a small, independent, family-run brewery, the Totnes Brewing Company is very close to zero waste and has a very low carbon footprint. With the main brewing area at the back of the bar, you can watch one of your future pints being made while sipping on your last, and the benefit of production taking place on site is that it significantly reduces carbon footprint. Many beer kegs are now made out of plastic as they’re lighter and easier to transport but of course, they’re not environmentally friendly, therefore owner Sarah Trigg reuses them as seats for the pub or gives them to the local community for free to be used as garden cloches.

As a nation of dedicated coffee drinkers, Brits are throwing away 7 million disposable coffee cups every day. As they are very difficult to recycle due to the layer of a waterproof plastic inside, this is adding to an already massive problem. At The Hairy Barista, a speciality coffee shop on High Street, they actively encourage people to use reusable coffee cups and they themselves use compostable straws as well as supplying and using vegan, organic and plant-based ingredients, food and drink.

Delphini’s  also use compostable cups, lids and spoons for take away gelatos, Waterside Bistro has banned plastic straws and The Kitchen Table, a bespoke catering company, use recycled or compostable kitchen supplies and take-away crockery and cutlery. 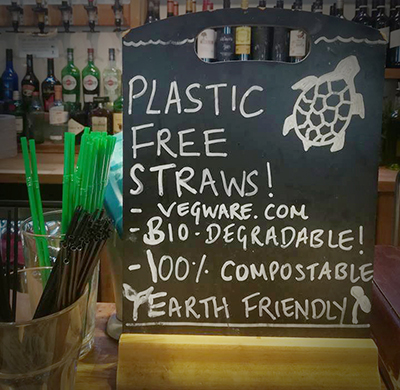 Issued: 2 June 2020 As life slowly begins to return to normal, South Hams District Council announces the opening of further public toilets. Toilets which have been closed since lockdown began on Monday 23 March are beginning to reopen. A further number are due to reopen on Friday 5 June. The Council have been working hard to reopen more of their toilets whilst ensuring the safety of their staff, contractors and members of the public.  Before reopening, all toilets will undergo a deep clean and the systems will be thoroughly flushed through. The first toilets reopened two weeks ago at popular beach destinations of Bigbury, Torcross, Strete Gate and North Sands. As people continue to enjoy open spaces and as markets restart, the following facilities will reopen from Friday: Additional cleaning will be carried out but users are strongly advised to closely follow guidance on social distancing and hygiene, both before and after using the facilities. The Council are doing their best to reduce the risk of infection but this depends heavily on users acting responsibility when using the toilets. South Hams District Council’s Executive Member for Environment, Cllr Keith Baldry, said: “It is a careful process to get all of the toilets safely back into circulation after the lockdown to address the very real risk of Legionella from the standing water.  As ever there is more to it than simply unlocking a door. “The heatwave has meant that more people are out and about visiting beaches and open spaces, resulting in increased pressure for facilities to be opened.  However, to reopen safely we need visitors to be patient while we put systems and cleaning schedules in place, which will ensure not only their safety but that of our staff and contractors. “We’re doing our bit to make sure toilets are thoroughly cleaned twice a day, but it is crucial that visitors also play their part by keeping 2m apart from each other while entering and leaving the toilets and by regularly washing their hands to avoid spreading the virus. “Further reopening of the toilets will happen as soon as we can.” While regular twice-daily cleaning is being carried out, the Council appeal to users to remain patient and considerate to their staff since this is for the safety of all. For more information on the Council’s services and Coronavirus response, please visit: www.southhams.gov.uk

Totnes has always attracted forward-thinking businesses with social responsibility at the core. Earth.Food.Love is the UK’s only, family-run, organic, bulk-buy, zero waste shop! Focusing on creating a better future, they decided to look back to the past, where eating real food with minimal packaging was normal practice. They believe returning to these simple ways will benefit not only our own health, but the planets too. The shop stocks a wide range of products such as grains, cereals, beans, legumes, flours, sugars, herbs, spices, loose leaf teas, nut butters, syrups, oils, vinegars, cleaning products and personal care products. Everything is self served and priced by weight, eliminating the toxic and wasteful packaging. Just take along any bottle, jar, tub or container; if it can be weighed, it can be used. Earth.Food.Love is located at 101 High St, to find out further information check out their website thezerowasteshop. You can keep up to date by by liking their The Zero Waste Shop Facebook page.

Did you know it’s National Camping Month? With the hustle and bustle of life and many of us relying so heavily on our phones and other electrical devices, what better way to switch off and relax than to take to the great outdoors and go camping or glamping. Put the phone down and listen to the birds sing, take away the ipads and build a den with the kids, and get away from the TV to gaze at the stars. With June being National Camping Month there’s no better time to try it - whether a first-timer or camping aficionado, there are many places in and around Totnes where you can escape to the country and get back to nature. Higher Broadgates Campsite is based in the beautiful village of Cornworthy, just 20 minutes from Totnes, where you can secure a pitch on their flat, working farmland for only £10 for 2 people. If you’d like all the joys of sleeping al fresco but you’re not ready to bunk in a sleeping bag, they also have 2 Bell Tents which offer many homely comforts including beds, fairy lights, BBQ, hamper and games costing £55 a night. The family run farm has a toilet and shower for visitors to use and is dog-friendly as well, offering the perfect excuse for a long, country walk. Just 3 miles from Totnes in the village of Littlehempston, Devon Yurts offers an excellent base for a short break or longer holidjay with their comfortably furnished traditional Mongolian yurts and beautifully rustic Shepherd’s Hut. Visitors will be able to cook a hot meal on site in the communal kitchen, toast marshmallows on a campfire or dine in one of the traditional, local pubs, while enjoying on site comforts including fully flushing toilets, hot showers and solar power. Prices start from £50 per night for 2 people in low season. If you’re camping on a budget and have all of your own equipment, Beara Farm is the perfect place to pitch up a tent or park your campervan. This 3.5 acre level meadow is only a 15 minute drive from Totnes just outside of Buckfastleigh, or if you’d prefer a more leisurely journey you can take an historic steam train from South Devon Railway which is a 30 minute walk or 5 minute drive from the campsite. At Camp Dartington just outside of Totnes you can wake up to views of Dartmoor, wander through 1,200 acres of stunning woodland and listed gardens, and enjoy many delicious treats at one of the onsite cafes and Shops at Dartington. The site also boasts a traditional 14th Century Barn Cinema and goat’s milk ice cream made fresh at Dartington Dairy! Other local sites include Steamer Quay Caravan in Totnes itself, Broadleigh Farm Caravan Park and Higher Well Farm & Holiday Park both near Stoke Gabriel. So consider swapping bricks for canvas this summer, breathe in the fresh Devonshire air and stomp your stresses away in the countryside.